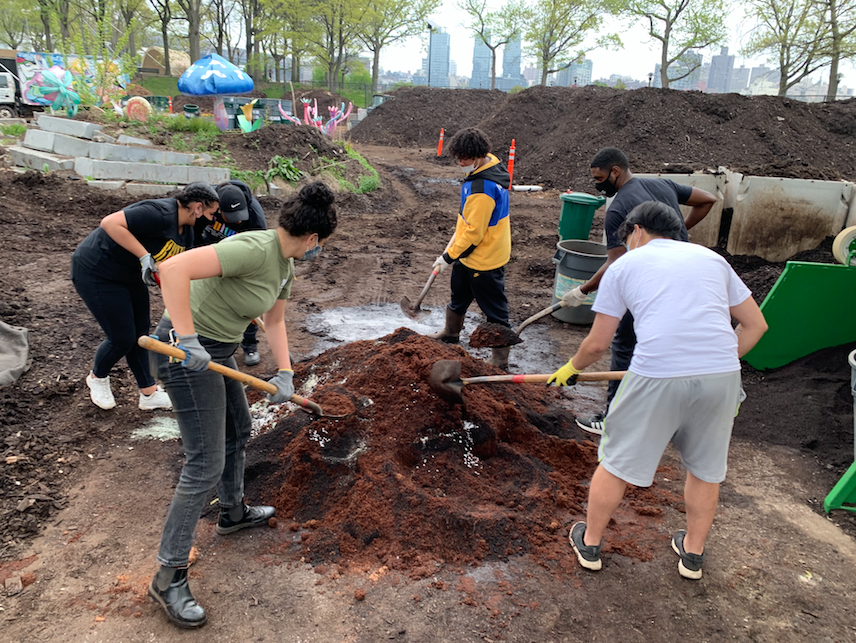 When Dominique Santiago was a child, she liked to play with dirt, “but this is the first time I was doing it for a purpose” says the Henry Street LES Mobile Market team member of her spring 2021 experience with the Lower East Side Ecology Center.

“The idea for collaborating with Henry Street came to us during the pandemic as we were thinking of the issues that are affecting our neighborhood residents,” says Jennifer Bombardier, education manager for the ecology center. “Food justice is where there is a huge need, and it was a good fit because Henry Street and we share a goal of access to healthy food.”

On September 23, the LES Ecology Center will honor Henry Street Settlement for its commitment to food justice, at its Fall Social fundraiser.

The young adults participating in the LES Mobile Market were the perfect cohort for the inaugural Food Justice Project. They were already delivering healthy food to 200 Lower East Side public housing residents with children through a partnership between Henry Street and NewYork-Presbyterian.

When Dominique and her teammates, Joseph Maria, Kayla Jones, and Hong Kit Chen, began delivering food through the Mobile Market in July 2020, they didn’t anticipate learning about how that food came to exist or its nutritional components—let alone making their own soil out of compost.

For seven spring weeks, in addition to making food deliveries on Tuesdays and Wednesdays, the team spent every Thursday afternoon primarily working in Henry Street’s Abrons Center garden. There they explored soil and compost varieties, investigated insects under microscopes donated by Biobus, and tended a garden, all through the lens of food inequity. The team gained practical skills like making salad dressing and seasoning food—which they used to embellish the leftovers they brought home—one of the perks of working for the Mobile Market!

“Our aim was to help them build hard skills in growing and preparing food while understanding how what we eat contributes to individual, community, and environmental health,” says Bombardier.

Joseph says that he and his family have been eating more healthfully because of the program. “Some members of my family have high cholesterol and blood pressure. As an athlete, I always watch what I eat, but now I’ve been cooking grilled chicken, onions, peppers, and other steamed veggies.”

In one Food Justice Project session, the group met in the ecology center’s compost yard in East River Park and made their own potting mix with raw compost, coconut fiber, perlite, and minerals. Other days, they shoveled and mixed huge piles of compost. To celebrate their last day, the group broke into teams to create dishes using the radishes, arugula, lettuce, and nasturtiums they had grown along with foods Bombardier had brought from a farmer’s market. And, Joseph brought his chicken dish—to rave reviews!

This fall, the LES Ecology Center will provide an afterschool program for Henry Street’s middle schoolers, where they, too, will get personal with worms and soil. And the best part? Dominique and Kayla are bringing their new knowledge to help facilitate it.