A Summer Of Learning, Thanks To SYEP 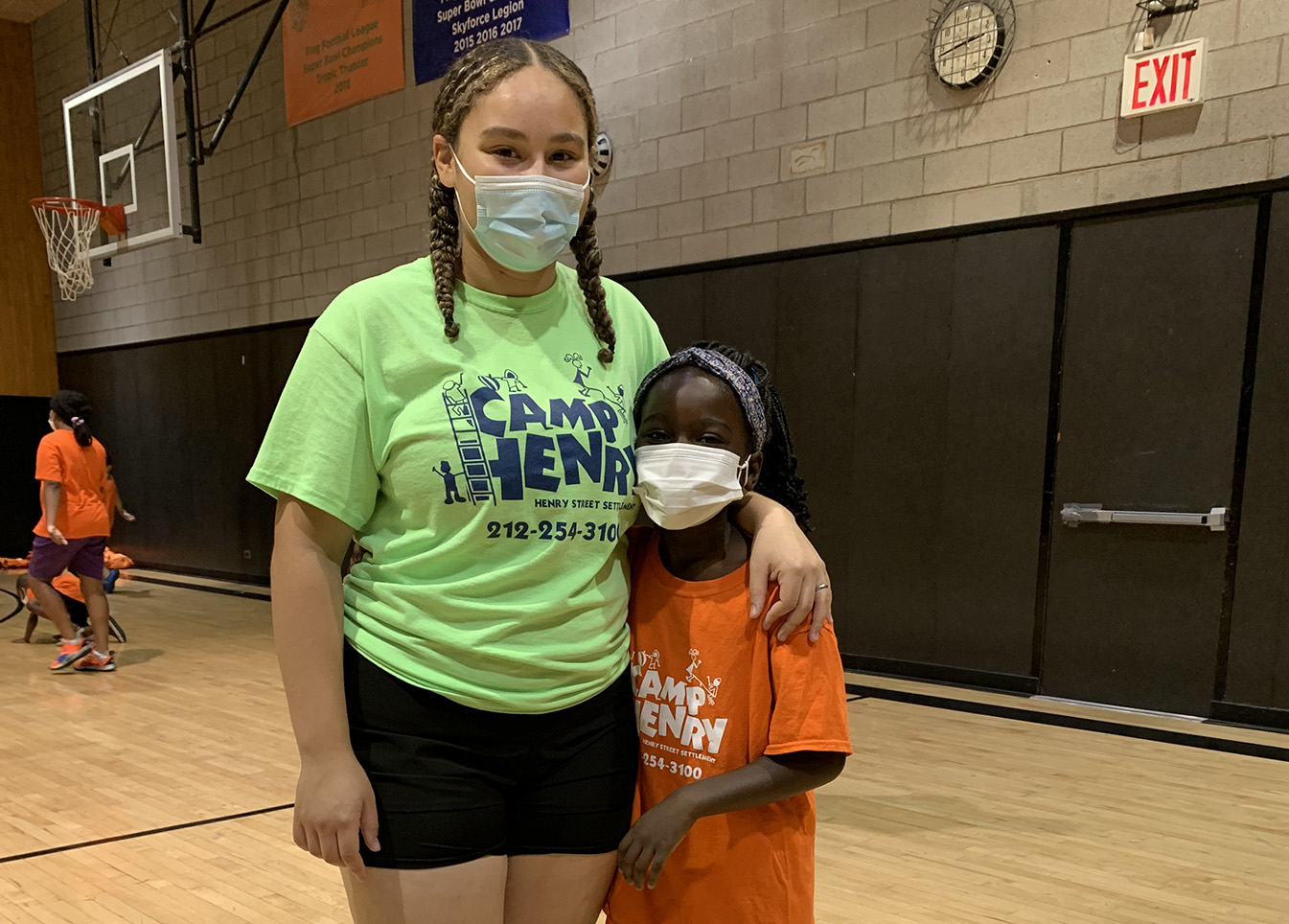 Above: Counselor Luna Minnifield, an SYEP particpant, takes a break from morning dancing with a Camp Henry camper.

It’s 9:00 a.m. at Camp Henry, and pint-sized participants are starting their day with a quarter-hour of stretching and then another 15 minutes of dancing. Amid laughing chicken dancers and Gangnam style ponies in Henry Street’s Boys & Girls Republic gym, counselors call out next moves, attend to shy children, and plan the day.

Counselor Luna Minnifield, 16, says camp has been a refreshing change after a year of hybrid learning. “You get here and the kids have so much energy; they brighten my day.”

Luna is one of 1,197 youth Henry Street placed in jobs through New York City’s Summer Youth Employment Program—a monumental feat after a year of social distancing. SYEP is a critical earning and job-experience opportunity that many young people missed a year ago.

“The kids call me Miss Looney Tunes,” says Luna. “They have no filter!”

The camp counselors are encountering children with social and mental health challenges after a year of isolation, and they are finding themselves re-teaching the basics, like standing in line. But Luna says she’s already applying the patience she’s learning by being a camp counselor to her own younger brother.

Although several dozen SYEP participants work at Henry Street, the majority have been placed among more than 170 sites, including other summer camps, city offices, shops, and even a cake store. Three young people are participating in a fashion program with Amsterdam’s Rambler Studios—our first international SYEP site.

Under the leadership of Johanna Ramirez, the six-week SYEP program has been a boon to multiple Henry Street programs. For example, interns have enabled a significant expansion of our COVID Community Response Team (CCRT)—a rotating group of several dozen youth who have been serving the community since the height of the pandemic.

One SYEP-CCRT participant, Jalen Burton, 19, was out delivering groceries to 10 seniors’ apartments on beautiful August day through Henry Street’s senior food pantry. “This job has been so much fun,” he says. “Doing deliveries means I’ve met a lot of people I’ve never met who live in my neighborhood. You can see that they like that the youth are helping our community.” Ben Rosenfarb and Eladia Berman were surprised to be assigned to Henry Street’s Senior Center kitchen. But both have found the summer unexpectedly fulfilling, as they help chef Ann Hughes cook, pack, and distribute nutritious Grab and Go meals to Senior Center members. Eladia, who lives near the Settlement and is starting a radiation therapy college program this fall, wanted to do something physical after a year of sitting around, she says. “This is a nice way to branch out and learn about working in general,” Adds Ben. “I’m learning how it feels to wake up and go to work five days a week.”

Pauline Li says that delivering food to seniors has been a good way to get out of her comfort zone. She also does office work in Henry Street’s Education Services building and even helps neighborhood residents sort their compost in front of Abrons Arts Center. She loves it when her senior meal recipients encourage her to drink more water on a hot day. She summed up her summer of learning: “When you give back to the community it feels good.”

SYEP is a DYCD Employment Program.