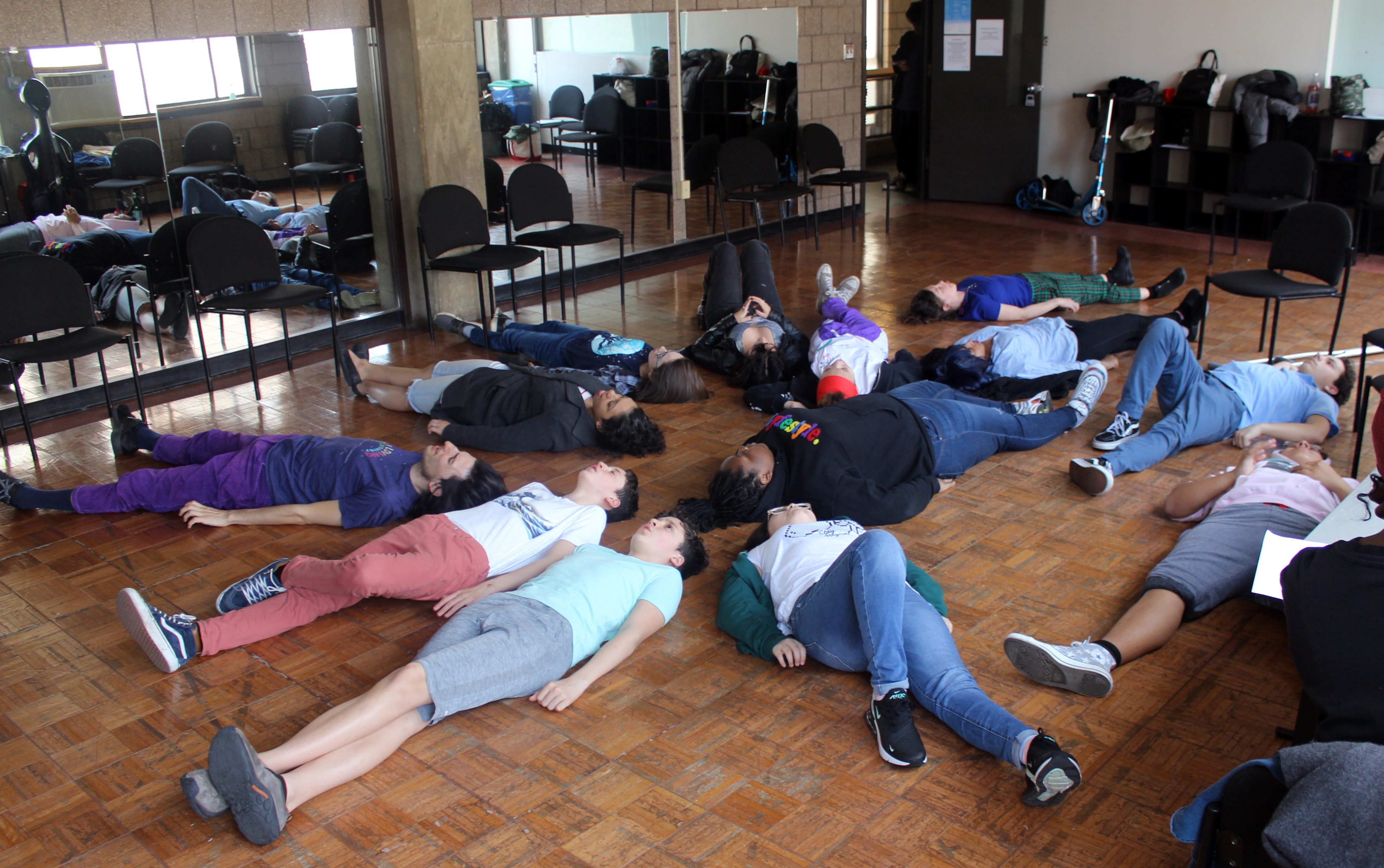 Members of Urban Youth Theater at Abrons Arts Center at a workshop with Morgan Bassichis and Ethan Philbrick of Klezmer for Beginners.

“Ok, I want everybody to find a spot on the floor. When you get there, lie down on your backs and look up at the ceiling.”

At the direction of comedic performer Morgan Bassichis, a dozen teens scrambled around the airy practice room at Abrons Arts Center to find a free square of floor. When they found their spots, a hush fell over the room, punctuated by nervous giggles. Bassichis, lying on the floor with them, took a deep breath and began leading the group in an exercise where they slowly built a song from the ground up without communicating with one another. Musician Ethan Philbrick sat in the corner, providing music on the cello.

The two artists, who will premiere Klezmer for Beginners at Abrons Arts Center April 11 through 13, were leading a workshop for the Urban Youth Theater (UYT), Abrons’s free theater group for young people ages 13 to 19. Over a semester in UYT, participants work with one another to devise original theater pieces, culminating in a final performance in May.

During the two-hour workshop on Saturday, March 30, the teens collaborated with Bassichis and Philbrick to build their improvisation skills. Workshop activities included movement- and discussion-based theater games, with students reflecting on the bonds they’ve built as a group since the beginning of the semester.

Teaching artist Monique Moses oversees the group, which has been meeting every Saturday since early February. The workshop was particularly relevant for Moses, an actor-director who has performed improv and sketch comedy for the past decade.

“Improv is a game-changer when it comes to getting people comfortable with one another,” Moses said. “I feel like kids aren’t usually given a lot of autonomy when they’re making art, so it’s powerful to see where they can go when they’re given the chance to be in charge of what they want to do.”

During one exercise, the group sat in a circle and Bassichis asked how the students’ ability to listen to one another had grown. One participant remarked, “At first we were all very shy and didn’t feel totally comfortable expressing ourselves, but now we’re like family. We’ve gained respect for each other’s ideas and have built relationships, making it easier to act with each other.”

After everyone got their chance to share, Philbrick and Bassichis performed an improvised song based on the conversation. The rest of the circle was captivated, marveling at their thoughts and ideas set to music.

It took a few minutes to get the jitters out, but soon everyone got the hang of the exercise and took turns improvising lyrics. When it was all over, one student remarked, “We really are comfortable with each other, because I’d never have done that with my friends at school!”

The workshop concluded with a collaborative exercise that tied it back to the upcoming Klezmer for Beginners. Bassichis and Philbrick performed a Yiddish protest song, and then worked with the youth to explore its history and devise a version applicable to present-day issues.

“Art is such an important part of social justice. What we’ve been practicing—improv—is freedom; it’s about not just accepting the scripts that have been given to us,” Bassichis shared with the group before they performed a raucous rendition of their improvised protest song. Philbrick, left, and Bassichis, right, performing a song from Klezmer for Beginners at the UYT workshop.

For Bassichis and Philbrick, Henry Street and Klezmer are deeply entwined. “We’re inspired by Henry Street and Abrons’s commitment to education and teaching—it led us to approach our piece as a learning project. It’s called ‘Klezmer for Beginners’ for a reason, we’re engaging in our own learning as part of the performance,” Bassichis said after the workshop.

“Our focus on improvisation in this workshop feels so relevant to our practice, not just to the project we’re making here but also to the skills we all long for: to adapt and transform the traditions around us.”

Added Philbrick, “The fact that Abrons is both so richly presentational and community-oriented in its programming makes performing Klezmer—where learning is an art form and we as performers are not the ones who know but the ones who are learning—feel really right to do here, in this space.”