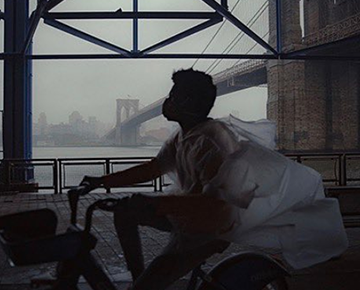 “The Masked Rider,” Bill Dinh, one of the finalists in @NewYorkNico’s #BestNYPhoto competition.

New Yorkers submitted more than 5,000 photographs to the #BestNYPhoto competition launched May 17, 2020, by documentary filmmaker and Instagram influencer @NewYorkNico (aka Nicolas Heller). Heller invited the public, including his 396k IG followers, to post their best pictures of the unprecedented landscapes forged by the coronavirus crisis to raise funds for Henry Street Settlement while demonstrating the strength and resilience of New Yorkers. Sales of the winning photos raised more than $60,000 for Henry Street.

Heller is dedicating proceeds from the final three days of the print sale—May 31 to June 2—to organizations fighting for racial justice, a move Henry Street wholeheartedly supports. As of writing, more than $5,000 has been raised for Color of Change.*

The winning photos, from left to right: “7 PM,” Nina Westervelt; “Light In The Darkness,” Anthony Peterson; “212,” Jacob Consenstein; “The Masked Rider,” Bill Dinh; “Drip Never Takes a Backseat,” Kevin Fallon; and “See You on the Other Side,” Julie Dodge.

The challenge garnered more than 5,000 submissions in under a week; winning photographs featured now-iconic imagery such as health care workers embracing during the 7 p.m. cheer (“7PM” by Nina Westervelt) and a sole pedestrian in a spotlit crosswalk (“Light in the Darkness” by Anthony Peterson). Fans picked four finalists, and four judges picked two, all of which went on sale May 26. The funds will help Henry Street’s monumental efforts to help low-income Lower East Siders and others throughout New York City access food, benefits such as unemployment insurance, emergency financial resources, and other services. It was the third contest Heller has initiated to inspire New Yorkers’ creativity and reignite a sense of pride during the pandemic.

“I used the fact that people are at home and have a lot of time on their hands as an opportunity to create these user-generated content challenges to remember this period,” says Heller, who earlier in the spring launched #BestNYAccent and #BestNYShirt challenges. “I had worked with Henry Street Settlement before; I love its work and know how important it is right now, so I thought there was no better partner. Plus I knew they’d be stoked and want to get involved. It goes with the whole community aspect; I feel like I’m part of the Henry Street community.”

Henry Street’s coronavirus relief efforts include providing more than 20,000 meals a week to New Yorkers in need including, the Settlement’s transitional and supportive housing residences; Meals on Wheels recipients; and other isolated seniors, immunocompromised people, and those who have lost their livelihoods during the coronavirus crisis. Henry Street also operates a Helpline, has provided emergency cash assistance, and has moved its mental health, employment, arts, and other services online.

Heller is known for his shedding an empathetic light on New York’s most marginalized and eccentric characters through his documentaries and photographs. His #BestNYAccent and #BestNYShirt challenges garnered hundreds of submissions, but #BestNYPhoto is by far the largest undertaking.

Photo printing was donated by Darkroom, and the panel of Judges included Daniel Arnold, Eve Lyons, Andre Wagner, and Heller.

*Update 6/11/20: In total, the #BestNYPhoto sale raised an astonishing $228,000, donated across eight organizations: Henry Street, Color of Change, Black Lives Matter, the NAACP, The Marsha P. Johnson Institute, The Audre Lorde Project, The Okra Project, and Warriors in the Garden.