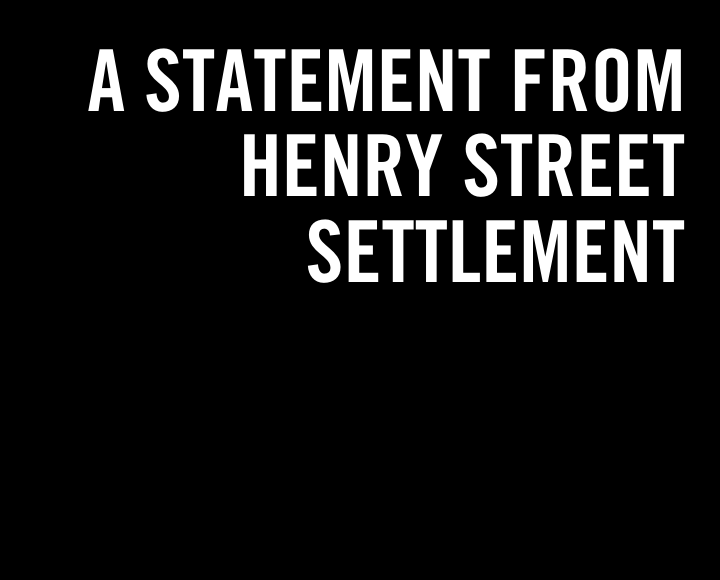 Henry Street Settlement is appalled by the current rise in racist and hate-driven attacks and language that is unfolding across the United States, in New York City, and in our own community. In addition to the rise in anti-Black and anti-Asian American/Pacific Islander violence that we have denounced on multiple occasions, we are also seeing an alarming and unacceptable rash of anti-Semitic violence and speech.

We should not have to reiterate that racial and ethnic violence have no place in our society, where everyone regardless of ethnicity or race deserves the right to live in peace, without fear of physical or mental harm.

Since its founding in 1893, our settlement house has been opening doors and demanding dignity and respect for all people. Henry Street was founded by a Jewish nurse, activist, and trailblazing thinker, Lillian Wald, who was motivated by the need for health care and social services for new immigrants, many of whom in our early years were Jewish immigrants fleeing anti-Semitic riots and attacks in Eastern Europe. It is astounding that today, in the United States and in our very own community, where generations of people have sought respite from prejudice and discrimination elsewhere, we would see a return to the backward beliefs that brought so many to our shores, and to our settlement in particular.

We must come together to denounce this violence and the rhetoric that fuels it. Henry Street will continue to stand together as a force against violence and hatred toward our Black, Asian-American/Pacific Islander, and Jewish team members, neighbors, or anyone experiencing hate-driven discrimination, and we recommit ourselves to doing the work of bringing people together to embrace one another’s race, culture, ethnicity, and identity.