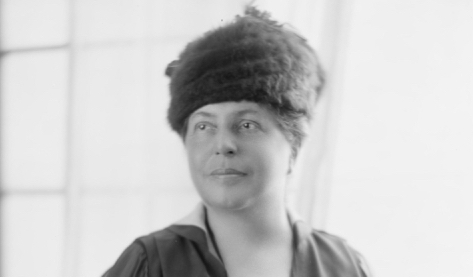 Above: Portrait of Lillian Wald in a fur hat. c. 1905. Courtesy of the Library of Congress.

Lillian Wald and the community of women she worked with to establish Henry Street Settlement will forever be remembered in LGBT history. On Thursday, December 9, 2021, the New York State Historic Preservation Office voted to approve a new designation of Henry Street Settlement as an LGBT historic site. Specifically, the agency acknowledged the queer-history significance of the buildings at 265 and 267 Henry Street, where Wald, an acclaimed public health nurse and social reformer, lived and worked.

The nomination crucially recognizes Wald’s romantic and platonic relationships with women at the Settlement as foundational to Henry Street’s beginnings. It also acknowledges the influence of lesbians in both the settlement house and broader Progressive Era reform movements. The listing now moves ahead for consideration by the National Register of Historic Places, which has listed Henry Street as a National Landmark since 1974. New York State continues to lead the nation in the number of LGBT historic sites on the state and national registers.

The NYC LGBT Historic Sites Project supported Henry Street in the new nomination thanks to a $25,000 grant it received from the National Park Service’s Underrepresented Community Grants Program.

“This is a huge win in our work to increase representation of LGBT people on the New York and national registers of historic places,” said Amanda Davis, project manager of the NYC LGBT Historic Sites Project. “This [designation] recognizes Wald’s contributions to women’s history and the homosocial world at the Settlement that helped shape her personally and professionally. We thank the Henry Street Settlement team for collaborating with us on this effort and the New York State Historic Preservation Office for continuing to support our efforts to make an invisible history visible.” In the mid-1970s, historian Blanche Wiesen Cook uncovered love letters in Wald’s letter collection at Columbia University and the New York Public Library. These letters and Wiesen Cook’s writings indicate that Wald had both romantic and platonic relationships with the women she worked with. This group of women affectionately called, “the Family” (a concept commonly used in women-run settlement houses), provided an essential support network for her from the 1890s until Wald’s retirement in the 1930s. One partner was socialite Mabel Hyde Kittredge, and another was Helen Arthur, a lawyer who was involved in the settlement’s Neighborhood Playhouse (now Henry Street Settlement’s Abrons Arts Center).

“Henry Street Settlement is deeply honored to have been part of this nomination, in recognition of Lillian Wald’s status as a woman who lived openly in a community of women and a member of what would become known as the LGBT community,” says David Garza, president and CEO of Henry Street Settlement. “Wald, a trailblazer of tremendous determination, foresight, and compassion, lived her life, and ran the Settlement, in the way she believed the world should be. She opened doors to those most in need, fought discrimination of every kind, and pushed those around her to value and uphold the views of every member of the community. Although we are careful not to ascribe today’s language or concepts to Wald, who was born in 1867, we can’t help but be certain that she would be thrilled at this proud acknowledgement of Henry Street Settlement as an LGBT historic site.”

The application process for this new designation began in 2017. To see the nomination come to fruition after many years has been gratifying for Henry Street’s public historian, Katie Vogel. “I didn’t learn any LGBT history when I was growing up, and I think that would have been really important to me as a queer person,” Vogel says. “It can be life-changing to have access to this history; it is overwhelming and makes me emotional to think about. Having this designation [as an LGBT historic site] really cements it in Henry Street’s legacy.”