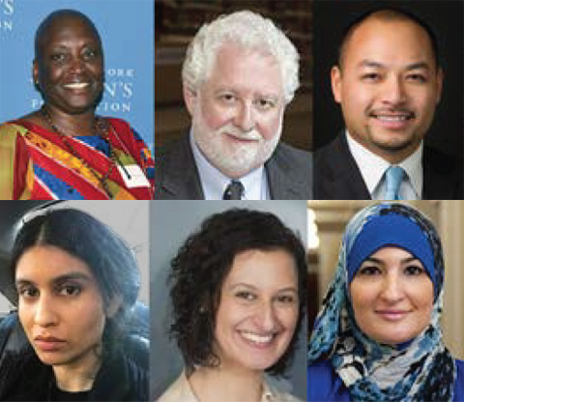 The event will be moderated by David Garza, Executive Director of Henry Street Settlement.

Community resource information will be available, and refreshments will be served. Simultaneous translation services for Spanish and Chinese speakers will be offered.

The Symposium is free, and reservations are full. Wait-list sign-ups can be made by calling 212.766.9200 x231 or visiting henrystreet.org/WaldSymposium.

Zeinab Eyega is the Executive Director of the Sauti Yetu Center for African Women and Families, a community based social service organization based in the South Bronx, New York. She manages the day to day functioning of the organizations as well as guiding its strategic directions. In addition to teaching and speaking, she has facilitated numerous cross-cultural competency training workshops for healthcare providers and reproductive health promotion seminars for immigrant women and girls across the U.S. She has a BA from the School for International Training in Brattleboro, Vermont and a Master of Social Science from The New School.

Philip Kasinitz is Presidential Professor of Sociology at the CUNY Graduate Center. His co-authored book Inheriting the City: The Children of Immigrants Come of Age received the American Sociological Association Distinguished Scholarly Book Award in 2010. His other recent works include Global Cities, Local Streets and The Urban Ethnography Reader. He is a member of the historical advisory committee for the Ellis Island-Statue of Liberty Museum and a consultant to the Lower East Side Tenement Museum. Kasinitz has held visiting appointments at Princeton, the University of Amsterdam and the Technical University of Berlin and has been a Fulbright Scholar at the University of Liege in Belgium.

Baseera Khan is a New York based artist and a 2017 Artist in Residence at our Abrons Arts Center. Her visual and written work performs patterns and repetitions of emigration and exile shaped by economic, social, and political changes throughout the world with special interests in decolonization processes. Her work has been exhibited in BRIC Biennial in Brooklyn, The Weeksville Heritage Center, the Texas Biennial, San Francisco State University, Hindu Kush and Hosfelt Gallery. She was an International Fellow in Israel/Palestine through Apexart, New York. Khan currently teaches at Parsons, The New School for Design. She received her M.F.A. at Cornell University and B.F.A from the University of North Texas.

Linda Sarsour, a Brooklyn-Born Palestinian-American-Muslim, is a racial justice and civil rights activist, every Islamophobe’s worst nightmare, and mother of three. She is the former Executive Director of the Arab American Association of New York and co-founder of the first Muslim online organizing platform, MPOWER Change. She led the coalition to close New York City public schools for two Muslim holy days and, was named one of Time Magazine’s 100 most influential people for her leadership of the Women’s March. This year, Linda joined leading social justice faith leaders as a Senior Fellow at Auburn Seminary. She has received numerous awards and honors including “Champion of Change” by the White House, YWCA USA’s Women of Distinction Award for Advocacy and Civic Engagement and the Hala Maksoud Leadership Award from the American Arab Anti-Discrimination Committee.