No Longer Remote, 2022 SYEP Program Provides More than a Paycheck 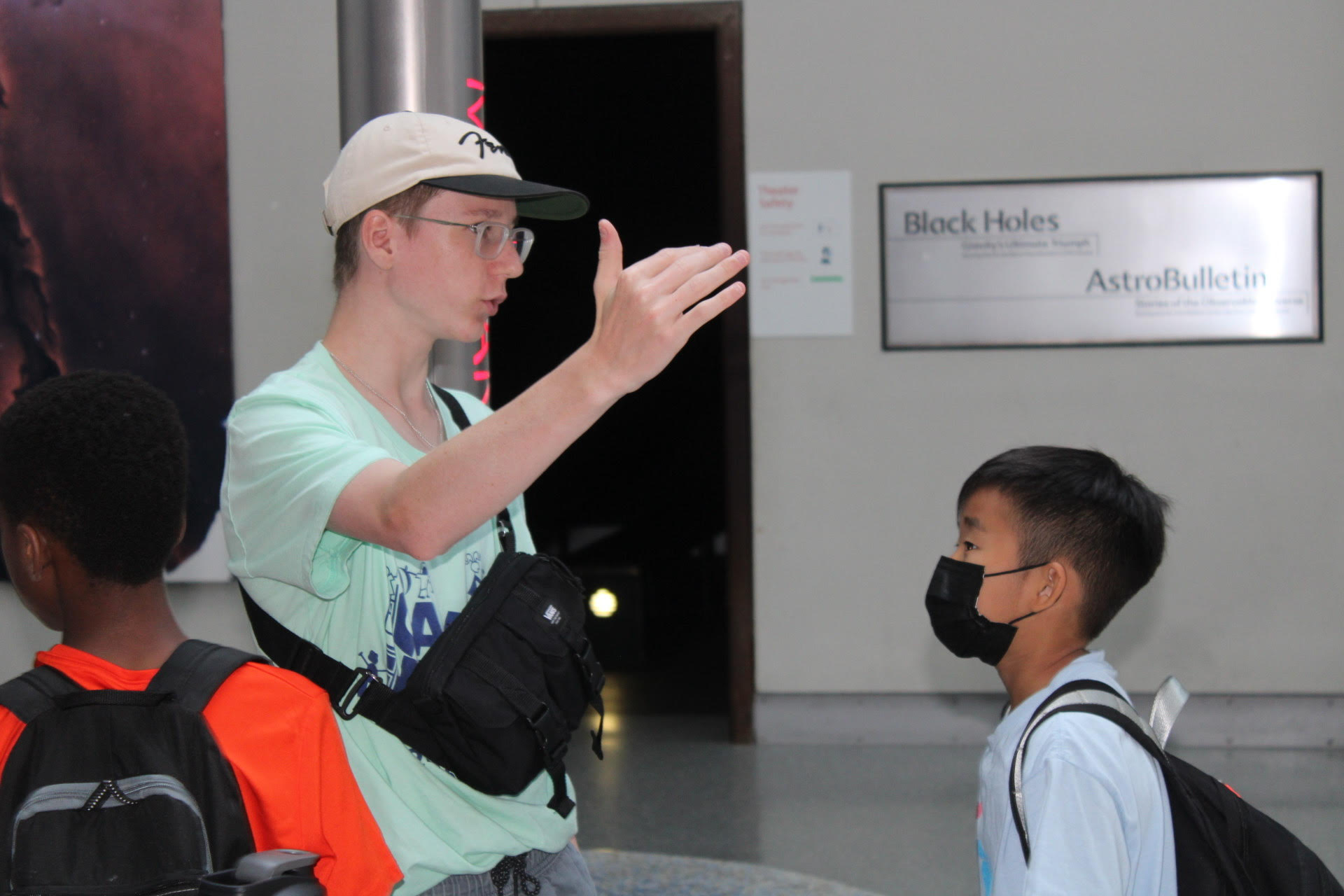 Doran Kaufman explains the planets within the solar system to a City Trekker at the Natural History Museum.

Henry Street Settlement, through its partnership with the New York City Summer Youth Employment Program, offered 1,919 youth aged 14 to 24 a sweeping variety of employment opportunities—the vast majority of them in-person—this summer, a substantial increase from last year’s cohort of 1,197. Henry Street’s largest SYEP turnout in recent years came as the Settlement recruited a wide range of new employers on the Lower East Side of Manhattan, including the FDNY/EMS station at 299 South Street and the artist PJ O’Rourke II’s art gallery, which sells custom t-shirts and hoodies on Lafayette Street. Several participants expressed that their placements fulfilled them in ways no paycheck could, which underscored the program’s success in its ongoing mission to provide skills and experience as well as income.

The expression “green thumb” describes SYEP participant Sarai Williams, 16, who was assigned to Compost Power, a nonprofit in Brooklyn founded by former SYEP participant Domingo Morales. The job fanned her burning passion for gardening all summer. Through her grandmother’s Canarsie vegetable garden, which produced tomatoes, peas, and cabbages used for classic Jamaican dishes, Sarai had discovered the wonders of agriculture early in life.

The only teenager and only woman working on the team, Sarai completed multiple tasks at the site from shoveling adult-height compost mounds, to watering trees, to placing the compost in small rounds about burgeoning vegetable plants. Compost Power, located on an out-of-the-way strip of land in Williamsburg along the East River, mixes mulch and scraps of food donated by scores of community members and several businesses to bring high-quality soil back into New York while reducing the city’s food waste. During the blazing summer, Sarai and her co-workers constantly mixed and rotated the mounds, ensuring the food broke down into carbon-rich compost in just a week.

Sarai Williams discovered the wonders of agriculture early in life through her grandmother’s Canarsie vegetable garden, which produced tomatoes, peas, and cabbages.

“Making compost is cool,” Sarai says. Her previous SYEP job took place at an all-girls group home, where she worked on painting and landscaping. “But this is my first real green job,” she adds, briefly looking up from the bushes she’s pruning.

Following the onset of the COVID-19 pandemic, Henry Street’s SYEP program offered only fully remote employment opportunities in 2020; last year, it provided a mix of remote and in-person opportunities. Its complete transition to in-person employment this summer yielded satisfying results in terms of participation, according to Johanna Ramirez, the Settlement’s SYEP director. Participants in cohort 2022 were paired with 281 diverse employers. Of these youth, 20% were Baruch Houses residents who came through the CareerFirst initiative, which provided jobs to NYCHA residents on the Lower East Side. Another SYEP initiative, Emerging Leaders, targeted youth who face employment barriers because they are runaway, homeless, live in foster care, or meet other eligibility requirements. This program placed 838 young people in jobs across New York City this summer.

Because Henry Street’s central aim is to support LES residents, Ramirez says she was excited to have engaged several new employers in the area, including the office of the Manhattan Borough President, Morgenstern’s Finest Ice Cream on Houston Street, and Steady Buckets—a basketball and leadership program—in Union Square. The Settlement also partnered with employers in other boroughs like Brooklyn Ballet. Some employers came through referrals from the Department of Youth and Community Development, which funds the program. Participants were also placed within the Settlement’s Community Response Team, a collective of youth aged 18 to 24 whose mission is to meet LES residents’ needs through outreach and community service.

We serve a lot of LES residents,” Ramirez says. “I think that it’s meaningful to them to be working and contributing to the community they live in.” Doran Kaufman says goodbye to his City Trekker group after their last field trip together.

SYEP participant Doran Kaufman, 17, yearned for a sense of independence from his parents, something he acknowledges is a cliché among high schoolers, before embarking on his senior year. Working as a camp counselor for City Trekkers, Henry Street’s field-trip-focused summer camp for youth aged 6 to 14, “was the first step,” he says.

City Trekkers was created to expose New York City children to the rich cultural opportunities surrounding them, some of which, like Broadway shows, tend to be out of reach for low-income youth. Outings to New York City attractions took place every day—including the One World Observatory in Manhattan and a baseball game at Yankee Stadium in the Bronx. Kaufman’s job was to safely guide his group through New York City’s bustling streets in single file once they exited the bus. The experience forced him to hone his leadership and problem-solving skills, which in return forged a sense of confidence within him.

Though the placement proved challenging, “The kids and I have come to an understanding,” he said at the end of the six weeks. “This was a good experience. I think it’s good to learn how to deal with children because when I’m older, I might have a job where the adults act like children,” he jokes. Neveaha Hayes learned patience through her placement at the Settlement’s Older Adult Center.

Neveaha Hayes, 16, found her voice while working as a receptionist at the Settlement’s Older Adult Center. Naturally shy, she at first found it difficult to communicate with the seniors, which was unavoidable in her role. Her lack of patience created only more obstacles. Some of the seniors suffer from dementia, and can require extra assistance when they sign in for meals at the front desk. Hayes, who had never encountered this issue, began asking the other staff for advice. The next few weeks were transformative, she says. Hayes learned to be more compassionate toward participants and more patient.

“As I was speaking to them more, I started to understand them and got the job done.”

Visit https://www.henrystreet.org/programs/employment/youth-employment/  for more information about the SYEP at Henry Street Settlement.