Awe-Inspiring Accomplishments in a Pandemic Year: Expanded Horizons Presents Scholarships to the Class of 2021 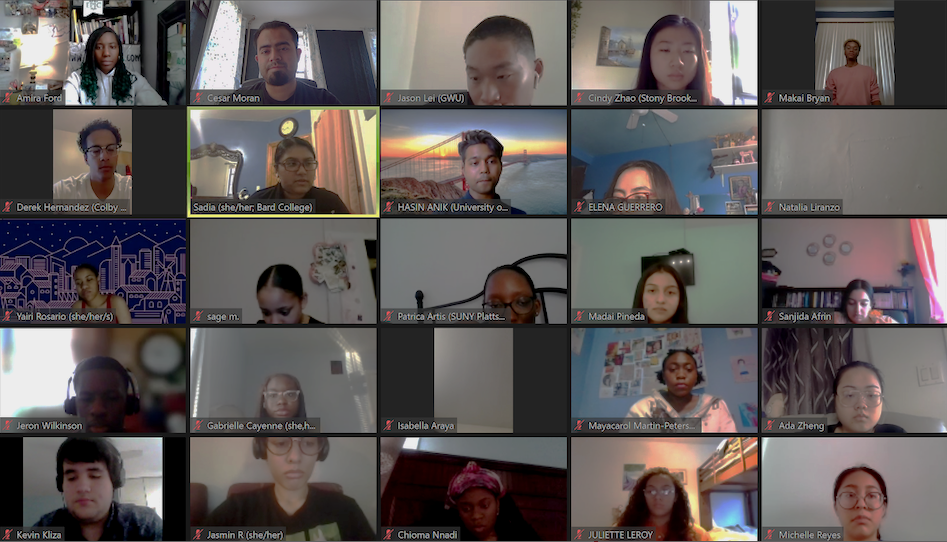 The 2021 Expanded Horizons Scholarship Ceremony began with an acknowledgment from Henry Street CEO David Garza that this class of students have overcome tremendous hurdles to graduate from high school and prepare to enter college. At a time of so much loss, he said, “I’m certain the world will be a better place when you make your mark.”

Tachrina Ahmed, director of College Access & Success, led the attendees in a moment of silence to acknowledge the impact of COVID-19 and honor the loved ones lost to the pandemic.

Expanded Horizons participants representing each high school year spoke of what they had gained from the program and its various components. Freshman speaker Nicole Satchell, who attends Orchard Collegiate Academy, addressed her experience with Girls Who Code, saying the program taught her about collaboration in sisterhood and brotherhood—as well as how to be creative with a computer—and had made her more confident “that I can do anything I want to do if I set my mind to do it.” Litzy Puma, a sophomore a Bard High School Early College, who is considering a business or medical career, commented on the Internship Readiness course, in which she learned about careers, job searches, and interviewing.

Junior speaker Ahmed Almatari, a student at Benjamin Banneker Academy, acknowledged that the Expanded Horizons College Readiness & SAT prep program had helped him clarify his values and career goals. A second junior speaker, Valentina Nenadich, who attends Millennium High School, spoke of the ways in which the Power, Privilege & Oppression course helped all of the students open their minds to other cultures, genders, sexual orientations.

Senior speaker Gabrielle Cayenne, who is graduating from Bard High School Early College, will attend Case Western Reserve University, where she plans to study geology and environmental engineering. She said of Expanded Horizons, “It’s been one of the main contributing factors not only to my college decisions but also to my academic success.” Gabrielle particularly appreciated workshops on financial investing and financial literacy; roundtable discussions around race, religion, and gender; and a college research tool that was shared with students.

This year’s alumni speaker, Pei Yi Mei, a 2021 graduate of Swarthmore College, returned to share a motivating message with the new crop of college-goers.

Describing that she had sometimes felt out of place at the start of college, she said she learned to put more emphasis on the relationships she has with others and, most important, with herself. “A part of self-care is having a support group, and here I want to give Cesar Moran and Henry Street Settlement a big shout out because they were part of my support group,” she said. She thanked Cesar for encouraging her to study abroad in Australia and Expanded Horizons for supporting her financially for four years. “Without you, I would not have been able to afford many expensive textbooks or trips back and forth to New York during breaks,” she said.

Pei Yi was offered several exciting full-time internships after graduation, and chose McMaster-Carr, where she will work in the company’s Chicago headquarters. “It’s ok to not know what to major in; opportunities will open and lead you where you want to go,” she said.

Cesar Moran, interim director of College Success, and Amira Ford, College Success coordinator, presented scholarships to each graduate, through funds generously provided by the Settlement’s long-time loyal donors. As the names of recipients of the Abrons/Aranow, Bloom-Margolies, and Sobie Family Scholarship Funds, and Bernard & Ellie Tannenbaum Technology Scholarships were announced, guests contributed dozens of comments that scrolled continually down the Zoom screen—followed by loud cheers at the end. The Tannenbaum scholarship is new this year, providing laptops to 10 students to combat the digital divide and ensure students have the technology they need to excel in college.

Matthew Phifer, vice president of employment and education, concluded the ceremony by praising the students’ accomplishments as awe-inspiring, especially during the pandemic year, and he emphasized that Expanded Horizons will always be here for them.

Following are the 2021 scholarship recipients: